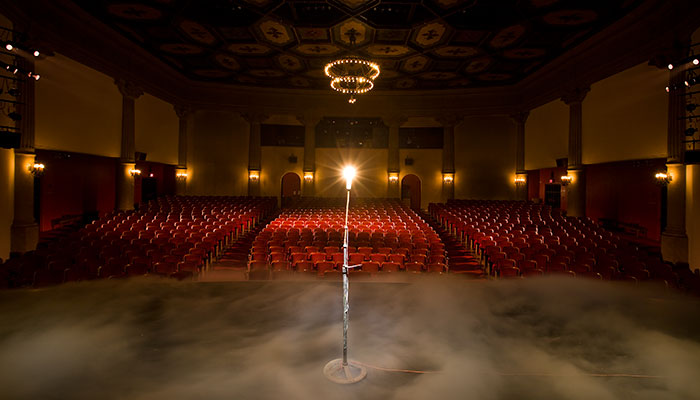 House lights up. The audience trickles out of the theatre in various discussions of delight and disappointment, their voices leaving echoes in the lobby as they leave the large double doors. The actors in various stages of exhausted and exhilarated, wipe off the last streaks of make-up clinging to their cheeks and turn off the green room lights. The last warm body in the theatre, perhaps a stage manager, takes one last look over the empty seats; their eyes linger on the last light left on before they quickly leave - locking the doors behind them.

The ghost light: their are some that believe every theatre has a ghost and in an effort to appease them this last light is left centre stage so that the spirits of the theatre may take to the spotlight in the early hours.

Although not everyone believes in the paranormal roots of the ghost light there are many superstitions that are still observed today. I have a feeling that this isn't just a coincidence. If you’re like me my emotions are often deeply influenced by the sights and sounds around me - turn on the soundtrack to Next to Normal and I will give you a memorable example.

With this in mind I began to wonder if these historical superstitious could be a byproduct of the mystical quality of the theatre. In a place where we travel to different countries, create mystical forests, participate in lovers' trysts, parish in sword fights - is it any surprise that the same energy and imagination that creates these scenes may also manifest in an apparition?

Although I haven't quite decided my stance on the supernatural I do feel that the vulnerability I share onstage may influence my experiences after the curtain call. If you can recall a moment onstage when you truly felt connected to your character, where who you are and who you play begin to blend together - a strong memory of that experience and your ability to suspend your disbelief in a most convincing way could play a large part in explaining the tendency to see ghosts in theatrical spaces.

Whether the supernatural truly inhabit our playing spaces or if our strong association with transcending experiences in the theatre plays tricks on our mind, I'm not sure we will ever truly know.

What I do know is that if one day I happen to find myself a wondering apparition you can expect me to make great use of that ghost light, making my Broadway debut.

So before departing for the night, may we switch on the ghost light—usually these days, an energy-saving compact LED bulb. Honorably, this helps make sure no one accidentally crashes into the scenery, which is set up differently for every show. Or mistakenly steps off the edge of the stage in the dark.

We currently do not have any tickets sales available at this time.