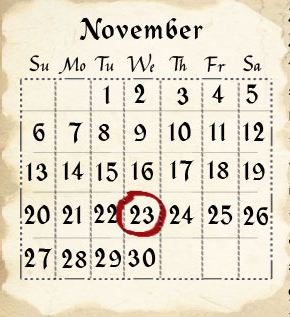 November 23 marks the traditional date when the first ever human being to take the stage and portray someone else other than himself took place. This person, according to various sources, most notably Aristotle, was a man named Thespis of Icaria. (which is also where we get the word “thespian”, meaning “actor”) In his first performance as an actor, Thespis supposedly took the stage wearing a mask and portraying the god Dionysus, which was considered by many to be blasphemous.

Among other things, Thespis is also traditionally credited with winning the first ever “Best Tragedy” competition in Athens. He is also credited with inventing Greek Tragedy, but it is more likely, if anything, he just changed it from its previous storytelling, choral form to the individual actor form which sometimes included a backing choir and sometimes not.

Whether he actually did any of these things or whether he was just one of the more notable early actors that happened to get his name recorded prominently, today, November 23 also marks the day when the ghost of Thespis supposedly haunts public performances the world over, causing mischief and mayhem wherever he can in those performances.

House lights up. The audience trickles out of the theatre in various…

The Hunchback of Notre Dame