Honesdale, Pennsylvania. Wayne Highlands Middle School proudly presents Disney’s High School Musical, Jr. This year will be a little different as we have transformed our gymnasium into a performance venue for our musical; because we are finishing up our major renovation project at the all new Honesdale Performing Arts Center, on the campus of Honesdale High School.

We hope you share the excitement as we do and join us, when we open Honesdale High School's Musical Production in the new performing arts venue with Chicago - The Musical in April of 2023. Until then, we are honored to welcome you to our fall musical production at Wayne Highlands Middle School Gymnasium on Friday, November 18, 2022 and Saturday, November 19, 2022 at 7:00 p.m., nightly.

Disney’s High School Musical first won its way into the hearts of audiences as a made for TV movie in 2006, which swept the awards season with an Emmy, Teen Choice, American Music, TV Critics and Billboards Music Awards. Two sequels followed, and school aged fans all over the world have enjoyed the upbeat music and dances ever since, and relate to the story of the modern day Romeo and Juliet. The handsome basketball star Troy and beautiful, brainy Gabriella battle the “Status Quo” expected by the set cliques in school, who are threatened by mixing groups when he happens upon Gabriella auditioning for the school musical and discovers that he can sing. While the Drama Club diva arranges to set up a clash of Troy’s big game with Gabriella’s Science Decathlon, friends on both sides emerge to save the day to find a way to let the couple break free from expectations and shine on stage together. Stereotypes are relinquished and barriers between cliques are broken down as the characters’ infectious enthusiasm and unity defy the odds over old expectations. Sing along with the familiar tunes and tap your feet with us as we bring this optimistic coming of age musical to life!

“Disney’s High School Musical centers on the unlikely friendship that evolves between the jock Troy and brainiac Gabriella at a karaoke contest,” explains Scott D. Miller, Executive Director. “Little did the two know that she would be transferring into his school. The duo decide — against their friends' wishes and to the dismay of school stars (a drama queen and her brother) — to audition for the high school musical. Needless to say mayhem occurs throughout the entire school and student body!”

General Admission seating tickets are on sale now, Regular $10, Senior (+62) $9, Student $7, Children (3-5) $5, Red/Black Pass (Complimentary) for all tickets and may be purchased online at www.honesdalepac.com or by calling the Honesdale Performing Arts Box Office at 570-251-9831. Performances are recommended for a general audience. As an advisory to adults who might bring children, this production is recommended for ages 5 and up. All guests entering the gymnasium, regardless of age, must have a ticket. 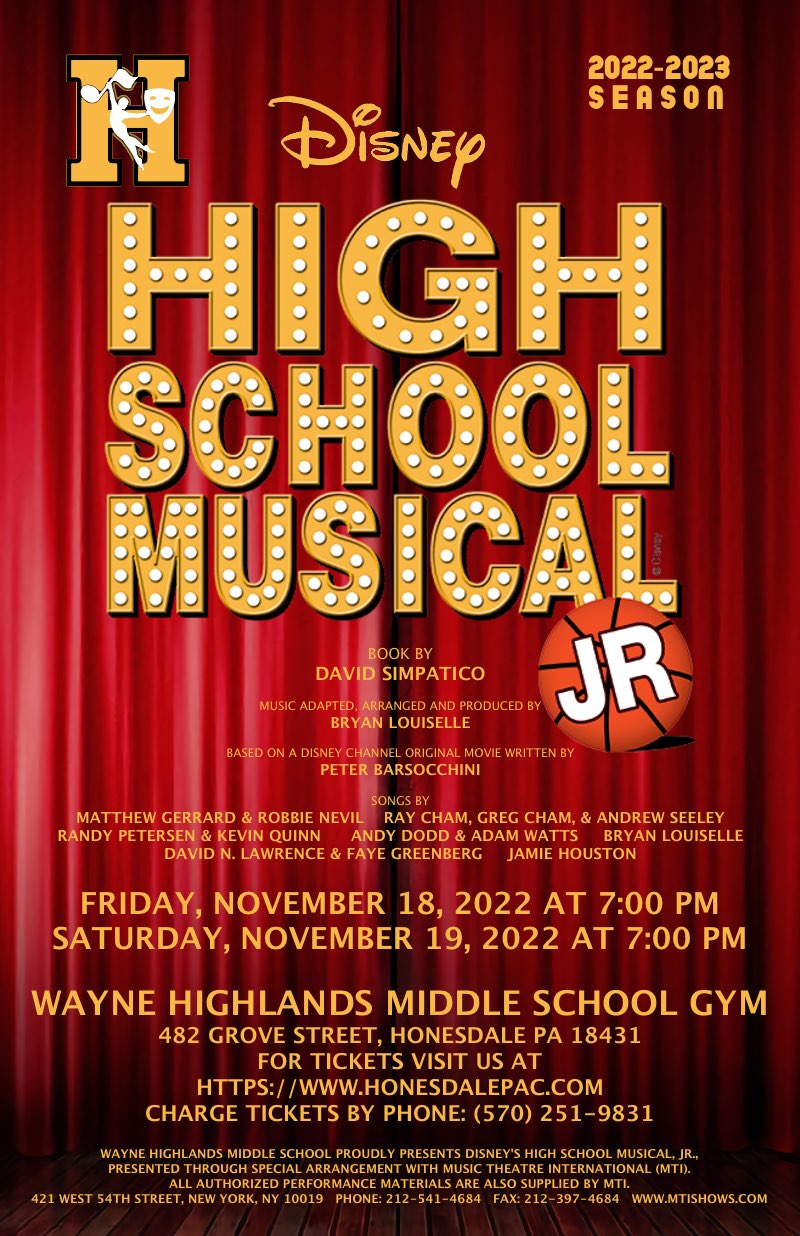